The last time we visited the Vancouver Aquarium we saw signs for the Great Canadian Shoreline Cleanup. I wasn’t sure exactly what it was but it did sound interesting so I decided to look into it and this is what I found out:

‘The national shoreline cleanup takes place every third week in September in every province and territory across Canada. The cleanup focuses on picking up and reducing people generated garbage from our environment.’

This year is their 20th anniversary, how had I never heard of this before?! Better late than never though. So on Saturday morning, the family got dressed up in clothes we didn’t mind getting dirty, our rain boots and rain jackets, with garbage bags in hand and we headed down to Noons Creek Hatchery in Port Moody. 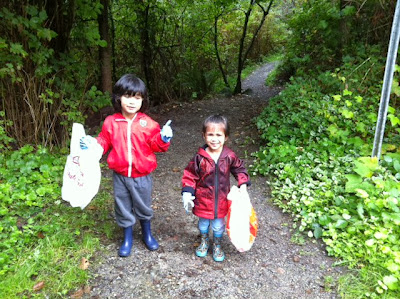 I wanted us to do this because not only would it be fun for the kids to wade around in their boots looking for garbage, it would also be a great way to talk to them about the environment and how we can help protect it.

In this video I ‘try’ and explain to Keyan why it’s important to clean up the garbage.
Next time I will have to prepare my explanations a bit better. Oh and I meant to say
suffocate, not choke 🙂

The trails were really beautiful with all the greenery and water. But when you looked really closely, there were so many little pieces of garbage especially right near the water while the tide was out. We found bottle caps, plastic bags, a tiny plastic toy, a glass bottle, beer cans, cigarette butts, a condom wrapper, small pieces of plastic and other unidentified garbage. One person we talked to even found a dirty diaper. It makes you wonder how things like that even get out there. But it’s great that events like the Shoreline Cleanup are planned to try and preserve and protect the environment.

We were out for about one and a half hours. They kids were pretty excited and gung ho for the first little while. They did get tired but had a renewed interest as we starting seeing crabs, shells and fish in the water as well. 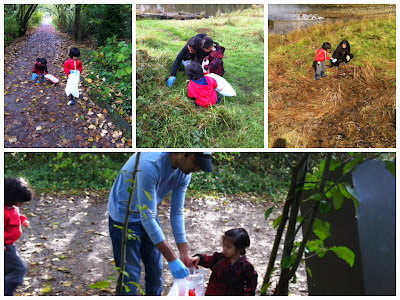 When we were done we headed back to the starting area to put all our collections in separate bags (garbage, recycling, cigarette butts.) They had coffee and baked goods for everyone who had participated. It was a really great morning and I’m sure it’s an experience we will always remember and hopefully participate in annually. 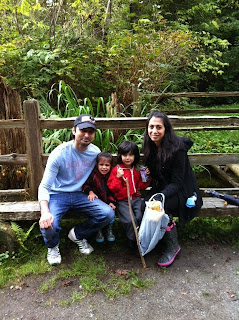 If you are interested in learning more, visit Great Canadian Shoreline Cleanup, an initiative of the Vancouver Aquarium and World Wildlife Fund.

If you want to participate in the shoreline cleanup, it’s not too late because it runs until September 29, 2013. Find a cleanup location near you here.

How do you talk to and explain to your your kids about the importance of protecting the environment?

*I was not compensated to write this post. This is just a great event and important initiative that I wanted to share with you.