Recently I wrote a post about Tips for Visiting New Moms. It was inspired by a friend who just had her second baby. When I showed it to her, she jokingly said I should also write a post about things you shouldn’t say to someone who’s pregnant. I actually thought that was a fabulous idea! More so because I was recently guilty about having asked #6 to an acquaintance and I’ve been kicking myself about it ever since.

For my research on this, I enlisted the help of the awesome moms from the Tri Cities Moms Group and boy, some of the things people say to pregnant women is unbelievable. Well, here is the list. Are you guilty of any of them? 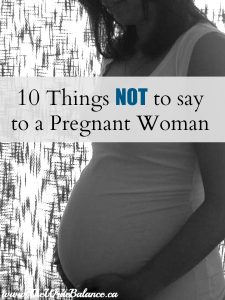 10 Things Not to Say to a Pregnant Woman

1. Food Choices. Don’t tell a pregnant woman what she should or shouldn’t eat. When someone is pregnant, they’ve all done the food research and asked their doctors. So if they are eating something, they are aware and it’s their choice. A pregnant woman doesn’t need anyone, especially a stranger, questioning why she is drinking coffee or eating sushi.

2. Are you going to have more kids? Slow down…She’s still carrying a baby in her stomach and you’re already asking about the next one? Let her get through this one before she starts thinking about another. And maybe she doesn’t even want to tell you. It is a pretty personal question.

3. Touching a pregnant belly. This may be alright with some moms-to-be and not others, so just to be safe, ask before you start touching someone’s pregnant tummy. You wouldn’t do it if they weren’t pregnant so ask for permission first. It’s the polite thing to do.

4. Asking if she’s having twins. If there are twins in there, you’re safe. But if it’s not twins, you’re opening a whole can of worms and making this poor  mom question her weight gain, the size of her tummy, her baby and if everything’s okay. So just don’t ask, it’s not nice.

5. Recounting your labour story. A pregnant woman definitely doesn’t need to hear your birthing story about how painful the contractions were, how long the labour was and how difficult the recovery was. They’re going to go through it eventually, no need to scare them.

6. Was it planned? Is that really any of our business? Whether they planned the baby or it was a surprise, all that matters is that a baby is coming soon. Just be happy for the mom-to-be and ask her how she’s feeling.

7. Are you going to be breastfeeding? Another really personal question, especially from a stranger. It’s a mother’s right to decide what she thinks is best for her and her child so don’t go pushing your opinions and beliefs on to others.

8. It’s about time. Wow, that’s a pretty judgy thing to say. You don’t know why they waited to have children. Maybe it was a personal decision. Maybe they were having trouble conceiving. Maybe they were even having marital problems. Whatever the reason, it’s not our place to make that statement.

9. Are you sure you have the right due date? Of course she’s sure. She’s been to countless doctor’s appointments and done tests. By saying that you’re just telling her she’s too big and trust me, no pregnant woman wants to hear that. Believe me, it’s a pretty tough job creating a life inside your body, no need to make her feel more uncomfortable and self-conscious.

10. Enjoy your sleep now, because it’ll never be the same again. Really? How are you supposed to do that? You’re pregnant. Firstly you’re only supposed to sleep on one side, you have pillows supporting every part of your body and you have a life inside of you moving around. How can you enjoy sleep like that? And yes, with a newborn you have to wake up a lot but eventually you will enjoy your sleep again.

Can you add to this list? What are some of the unbelievable things that people said to you while you or someone you knew was pregnant?