A Day in the Life…

It’s still dark outside as I hear the pitter-patter of my two-year old daughter, Kyah’s feet, making the trip from her room to mine. Since we recently made the transition from a crib to a bed, Kyah’s been taking advantage of her new freedom to come into our room at about 5am every morning. Once she’s climbed into bed with us, she eventually falls asleep again. Ahhh, sleep.

Kyah wakes up when she hears Keyan, with an excited look on her face. “Teyan’s awake!” she cries gleefully. We get out of bed and with Kyah holding my hand, we walk to Keyan’s room to get him and start our day.

We like to cuddle a bit in the morning whenever possible. 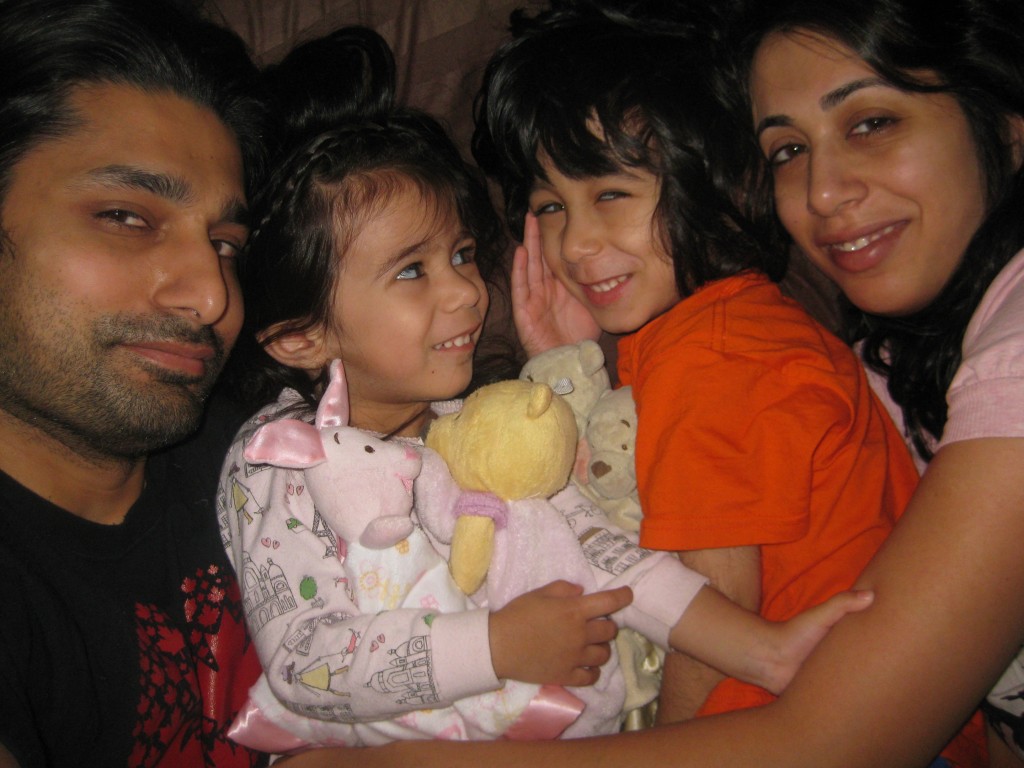 Then Kyah will need her overnight diaper changed and Keyan will need to relieve his over-filled bladder. After that we head to the kitchen to have breakfast. Except that today is Tuesday and that is nail-cutting day. The kids love it because its the one morning of the week, they are guaranteed to be allowed to watch TV while I cut their nails.

Once that’s done and the kids are finished whining about how they want to watch another show, we wash our hands and get ready for breakfast. Depending on the type of morning it is and if we are in a hurry or not.  Breakfast is usually one of these options or a mix of a couple of these: waffles, porridge, cereal, pancakes, french toast, veggie breakfast patties, chicken bacon or eggs. Today was a bit of a hodge-podge breakfast that included cereal, sliced fruit, yogurt and cheese.

Then we had some fun just playing with toys before we headed out to the library. 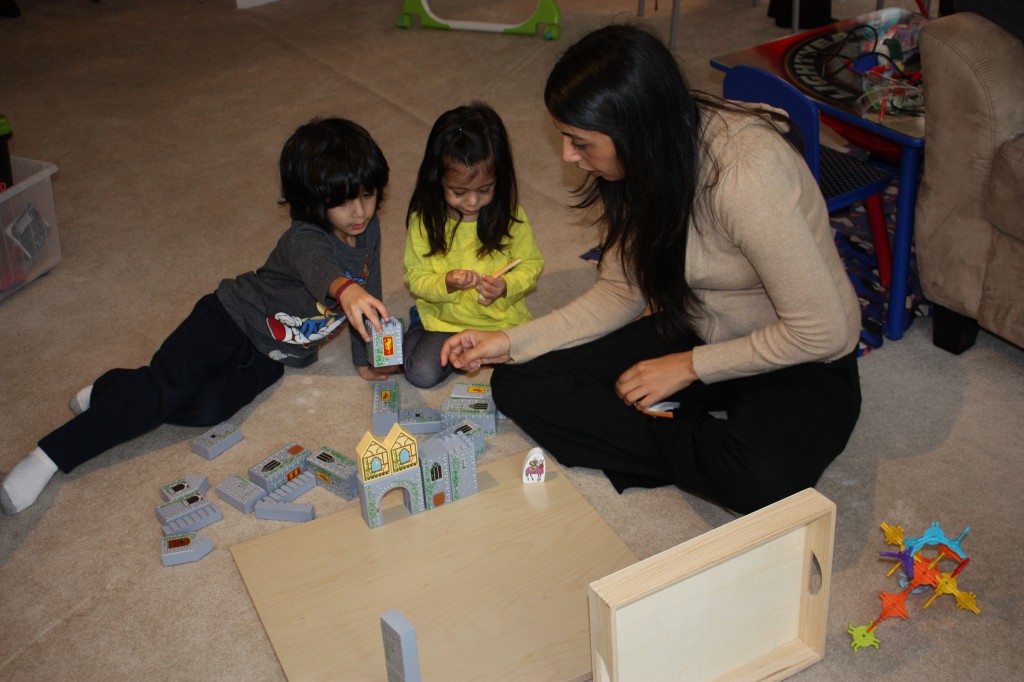 Usually we walk to the local library once a week for story time and pick some books to borrow. But since the story time program was on a break, we just picked some books to read and a few to bring home.

At home the kids played with their toys while I made some lunch for them. We ate together as we looked through some of the books we had brought home.

Then Keyan headed to the bathroom for his scheduled meeting with la salle de bain and I got Kyah ready for her nap. Her routine includes, a couple of books, a song, a sip of water, a hug & kiss, a song and then I leave the room. She then proceeds to whine and come out of her room or cry and ask for more water, hugs and kisses. This can go on for anywhere between half ann hour to 1.25 hours. In the meanwhile, I help Keyan clean up, read him a book and tuck him in, he’s easy peasy.

They usually sleep between 1 to 2 hours and in that time I try to get something done from this list: start dinner prep, do a little cleaning, laundry, do some work on my blog, do some social media stuff and emailing. Oh and sometimes I use that time to catch up on GH.

Today, after naptime was over and the kids weren’t cranky anymore, we had a snack, yummy yogurt drops. 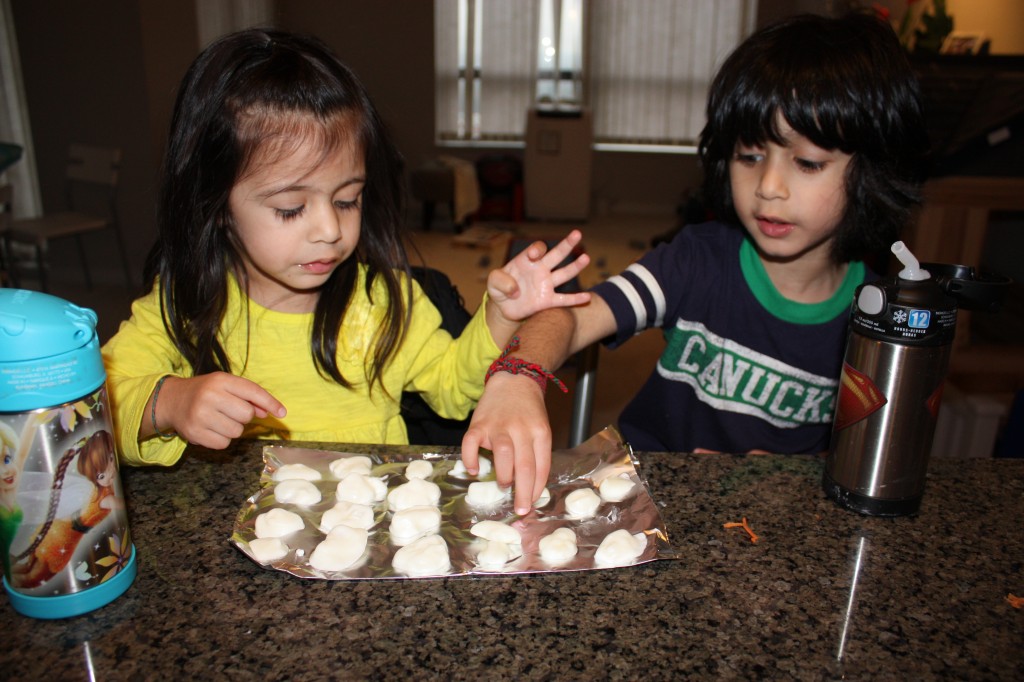 Then we put on YouTube to play some of our favorite Bollywood songs, we jumped on my bed and danced around my room. This is something we definitely like doing on a regular basis. It’s fun and gives the kids some South Asian culture in their lives.

Since it was Tuesday, Keyan had his Sports of Sports program at 5:30pm. I packed the kids a dinner-to-go and we headed out to the Pinetree Community Centre. After some fun running around and kicking a soccer ball, we made a pit stop at the market near our house and just had a produce free-for-all. I told the kids to pick whatever fruits and vegetables they wanted into their rolling baskets. We ended up with watermelon, strawberries, raspberries, bananas, pears, apples, mini mandarins, broccoli, carrots and celery. When we got home, a juicy fruit feast was had by all!

Then the kids had their baths, we said our prayers and the us parents tagged-teamed the kids. The hubby took Kyah and I took Keyan.  We brushed their teeth, read them stories, sang to them and tucked them in. It wasn’t completely smooth sailing, but after a few call backs, the kids were down for the count.

I headed back to the kitchen to tidy up and make Keyan’s lunch for preschool the next day. After that, a shower, a show and a little work on this blog post. It was actually a pretty great day! Each day isn’t exactly the same. Some include meltdowns and tantrums from the kids, some involve mommy meltdowns, others involve no hubby or added relatives. But nonetheless, each day is an adventure.

Before I head to bed, I’ll hope that my little night time ninja doesn’t wake up in the middle of the night (as she very often does) and quietly creep into my room and stand by my bed until a notice her. It’s actually quite cute when it happens but really unneccasary for both parties involved.

That is one of many typical ‘Days in the Life,’  episodes in my existence. Can you relate? Well if your day is similar or even completely different you’re bound to enjoy  these other ‘Day in the Life’ posts from some awesome bloggers from the West Coast Parent Bloggers group I’ve teamed up with. So hop on over to their blogs and check out was goes on in one day in their life.