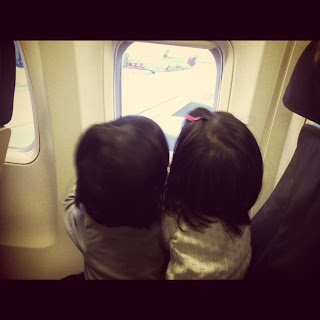 Kids on a plane, kind of makes you think of Snakes on a Plane. Of course kids are way cuter than snakes in my opinion, but they can garner a similar response in certain situations.

I remember pre-baby, if I was getting on a plane and I saw babies on board, there was an inner groan and I would be thinking, oh no, there is going to be a lot of annoying crying. I would also wonder why parents couldn’t get their own kids to stop crying or get them under control, especially being in such a small space with so many people.

Of course now I know better. I know that babies are likely to cry on a plane for many reasons including their ears hurting or being in a cramped, unfamiliar environment. I also know that no matter what, you can’t always make your kids behave the way you want, no matter how hard you try. This is especially true on a plane where there is no escape.

Having said all that, for our plane ride from Winnipeg to Vancouver, I was armed with everything possible to keep my kids occupied: an Ipad, crayons, books, play doh and kids head phones.

I’m sure there were passengers who saw my two little ones and had that same internal groan that I use to. But they, along with myself, were pleasantly surprised.

No one heard a peep out of my three-year old who watched t.v. the whole time and didn’t want to question why I was letting him watch show after show on Tree House. And my one and a half year old played with everything I brought and I even managed to get her to nap for a bit.

Quite a victory for this mom and one step forward for Kids on a Plane.

2 thoughts on “Kids on a Plane”