I took the plunge! I decided to start potty training my 28-month old and guess what? It worked! Five days after we started, Kyah was 85% potty trained and by day ten, I’d say she was at 95%. That 5% is for the times when she’s out or in the car and a little bit of pee comes out but then she holds it until we get her to a potty.

And when I say she’s trained, I mean I don’t even need to tell her that it’s time to sit on the potty, she tells me if she needs to pee or poo. She can wear underwear and clothes and not have an accident. She even wakes up and calls us in the middle of the night if she needs to use the bathroom. Now I would call that success. A New Year and no more diapers!

It wasn’t easy and there are some things that we’re dealing with that were triggered by the potty training but if you look at the big picture, it’s worth it to have Kyah using the potty and not having to change anymore dirty diapers. It’s great and for those of you who are thinking about starting I wanted to share with you how we did it.

Making the decision to potty train.

When we decided to potty train Kyah, we did it over the Christmas holidays. I picked three days that I knew we wouldn’t have to leave the house so that I could completely focus on Kyah. I made sure the hubby would also be around for at least the first day or two so that he could help out if need be, especially with keeping our oldest, Keyan, busy. I also mentally prepared myself for the fact that it would probably take longer than three days and that it may not even work if Kyah wasn’t ready. Then we prepared and preparation is KEY! You can read all about our potty training  preparation here

First thing when Kyah woke up in the morning, I reminded her in an excited voice that today was the day that we were going to give away all the diapers and now we were going to start potty training. Her diaper was full from the night before, so I took it off and cleaned her and told her it would be her last diaper and soon she would get to wear underwear. We sat on the potty for a little while but nothing happened. We proceeded with the rest of our day. 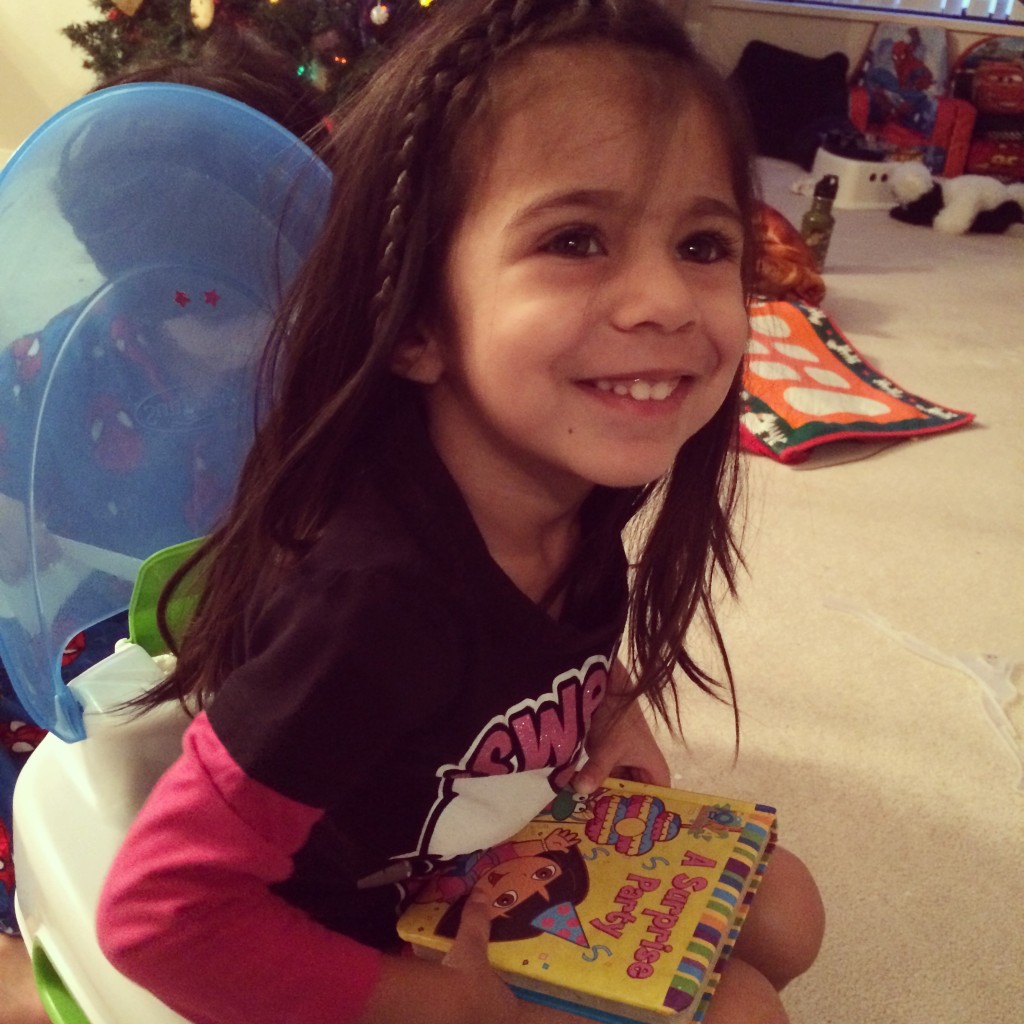 First thing when Kyah woke up in the morning, I reminded her in an excited voice that today was the day that we were going to give away all the diapers and now we were going to start potty training. Her diaper was full from the night before, so I took it off and cleaned her and told her it would be her last diaper and soon she would get to wear underwear. We sat on the potty for a little while but nothing happened. We proceeded with the rest of our day.

First we went around and collected all the diapers we could find, on the dresser, in my purse and in the swimming bag and put them in a box to giveaway. Kyah then wanted to wear underwear because that was something she was really excited about. My plan for day 1 was no underwear at all because when they are wearing something, it feels like a diaper and then they’ll just go  in it. But she insisted. So I made a deal. I would put an underwear on her and if she peed in it, then no more underwear for the rest of the day. So she put it on and we sat down to eat breakfast. Of course, she did end up wetting the underwear a little. So we went back to the potty to try finishing but only a few drops came out. I still rewarded her with a smartie to encourage her. And then no more underwear.

The rest of the morning we just did the usual things, played, read, built gingerbread houses and ate. And every so often, i would just tell her that it was time to sit on the potty. We didn’t really have much success, maybe a few drops here and there. But I tried to take that as a positive sign that she was good at holding her pee.

Then it was nap time, so I explained about her special underwear for sleeping (pull-ups.) She put them on along with a pair of her princess underwear on top. I’m sure she pretty much pee’d in her pull ups almost right away because when she woke up after 45 minutes, her pull up diaper was totally soaked.

So I changed her and she insisted on keeping the underwear on. That was a mistake because soon she wet those as well. It was back to being naked. By this point I was feeling pretty discouraged. But I reminded myself that it was just the first day and that she’d been wearing diapers for more than two years so it was going to take some time. We continued what I’d been doing all morning.

Then all of a sudden  in the late afternoon, we got a full potty of pee. After dinner, the same thing, number 1 and number 2. Yay! Progress. I high-fived with Kyah, told her how proud I was of her and gave her her treats.

That night before bed we put a pull-up on her, a pair of underwear on top of that, to make her feel like a big girl and she went to sleep. 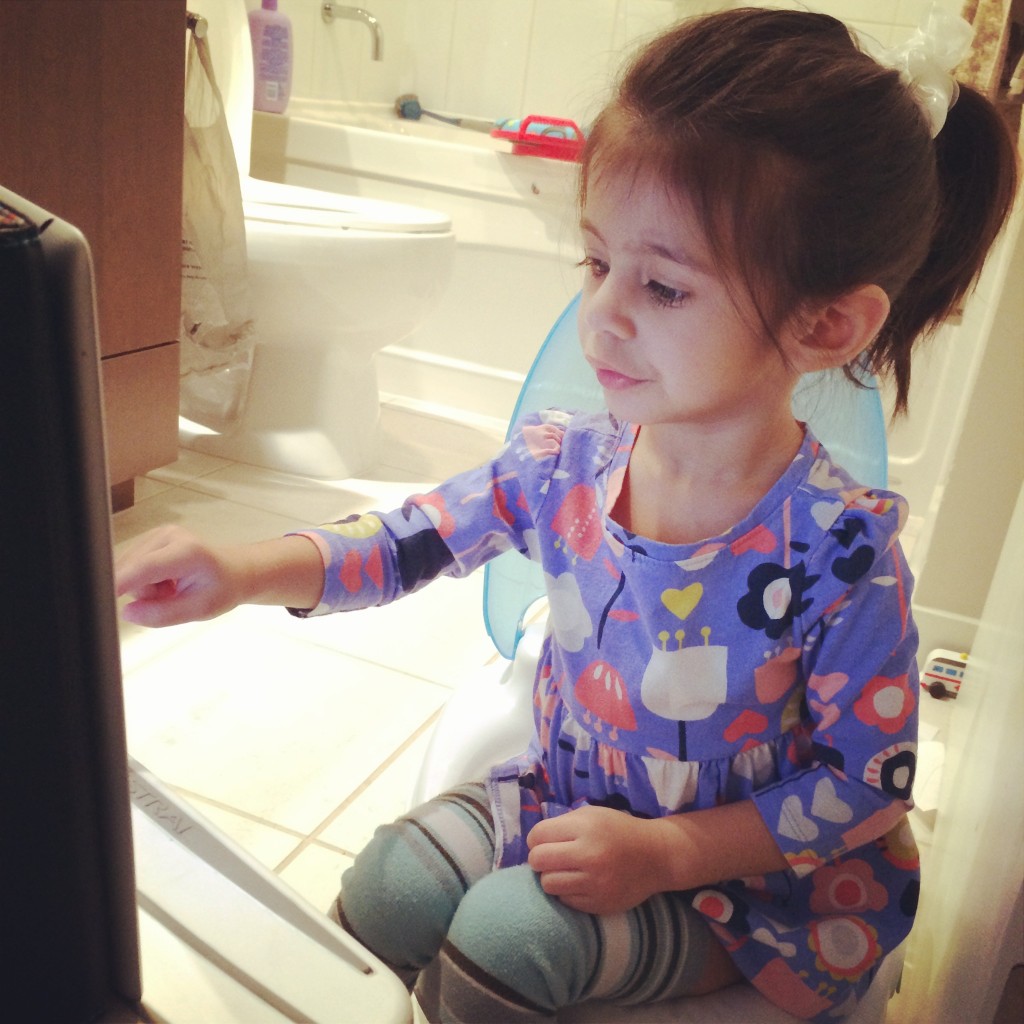 On day two, we pretty much started the same way as  Day 1, with a diaper full of pee. Today, along with books, I also let her play some games and watch some songs on the iPad each time she sat on the potty to try. I think the key was just having her feel relaxed while she was sitting.

We went along with our day as normal, just without wearing any bottoms. I still didn’t feel like Kyah was ready for underwear. The morning was more successful than yesterday, we had a good pee in the potty but that was it.

At nap time I put pull-ups on her and of course she wet them. I think having something on just makes her feel more relaxed. It’ll just take a little more time (and more patience.) So far she’s never actually told me she needs to pee, but I guess that’s because I put her on the seat before she can. The positive I can take out of this is that she is good at holding it, which is necessary for potty training.

In the afternoon we had one pee in the potty as well. No poo all day, which is not good because normally she goes at least 2–3 times. I was worried the training was making her constipated. I’d have to try and get more fibre and water in her tomorrow and hopefully that would help. I’m crossing my fingers for no middle of the night dumps! 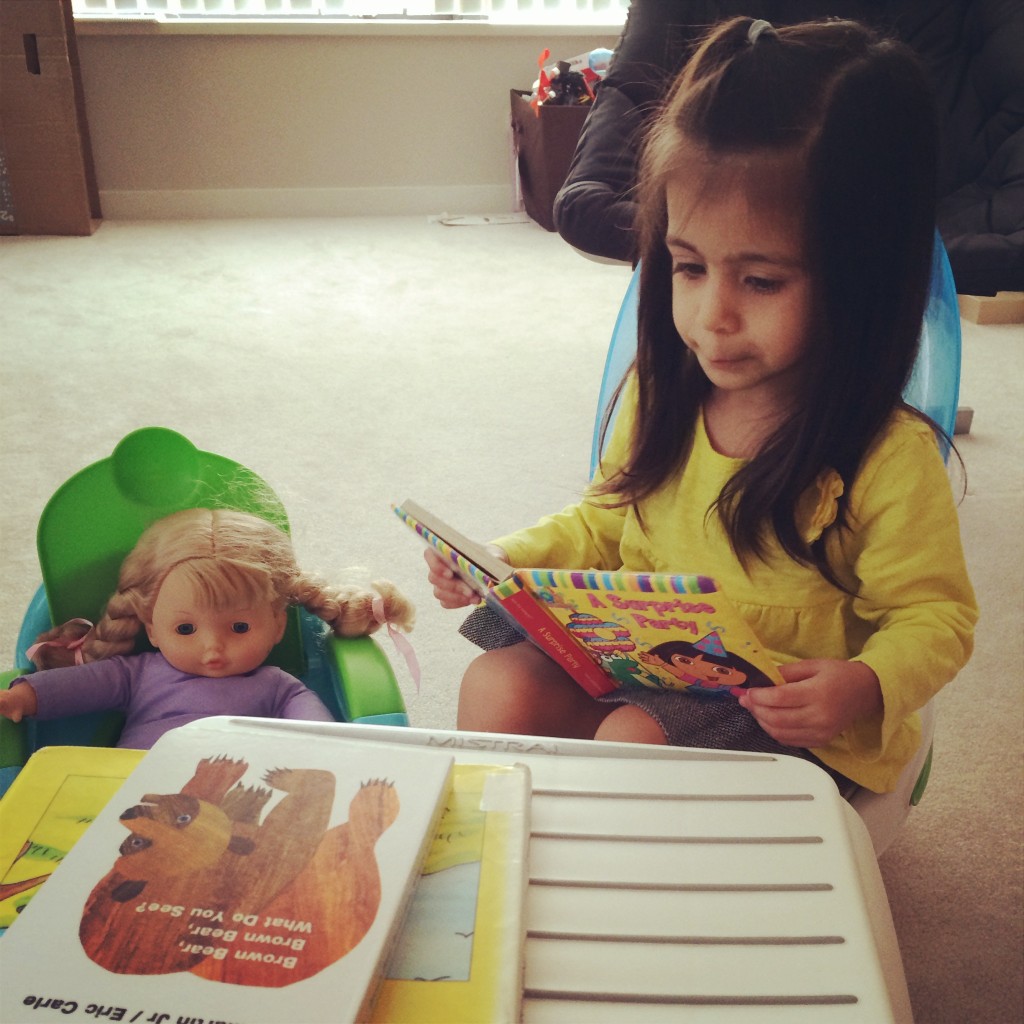 This morning, Kyah woke up with a dry pull-up! Not only that, she did her number 1 and number 2 right in the potty before breakfast. Rest of the day pretty much followed suit. Pee in the potty before nap. Dry pull up at nap time. It was awesome! I told her how great she was doing and gave her her candy rewards.

But then my regime hit a hiccup because I had made a commitment a while back to meet some friends for dinner at 4 o’clock. So I took the portable potty and a change of clothes and headed to the restaurant. We sat on the potty before dinner but nothing. And you guessed it, we had a wet potty training underwear. It made me feel guilty for wavering from the plan of three days of sequestering for the training, especially since the rest of the day had gone so well. But I couldn’t change anything, so I just moved forward.

I sat her on the potty before bed and then she put on her pull up and underwear and went to bed.

I packed a bag with a portable potty, wipes, a change of clothes, a pull-up and a change of potty training underwear. I made sure to sit Kyah on the potty at regular intervals: first thing in the morning, after lunch, after nap time, before dinner, before  bed and right before we left the house. If we were out or at someone else’s house, I made sure to keep going with the same routine. I would also continually remind Kyah that pee and poo was for the potty and not for her underwear.

One great thing I used for Kyah was dresses and baby leg warmers, so that whenever we were indoors, I could let her be naked under her dress and she wouldn’t get cold.

She did really great, with minimal accidents and lots of sugary, chocolatey treats.

We continued with the same regime as the last three days, but now we let Kyah wear regular underwear (which she was very excited about) during there day. And all of a sudden, SHE started telling us when she had to use the potty. So we had to be just as vigilant as before to make sure we were listening to her.

She was consistently waking up dry from her nap and bedtime. Her accidents were minor, just a little pee coming out if we were in the car or we took to long to her her to the potty if we were out of the house. But she held the rest until we got her to the potty. 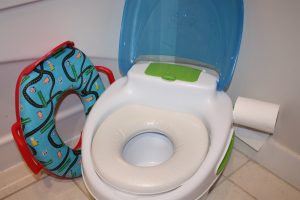 We no longer regularly put Kyah on the potty, she tells us. If we are going to be out of the house, then we do get her to sit before we leave but now I’m pretty confident that she will tell us when she has to go. The next step will be to eliminate pull-ups at nap time and bed time.

We did experience some side effects. There was some constipation on her end but that is normal considering that it was probably stressful for Kyah at first. We just made sure she drank enough water throughout. Bed times have become more of a battle because she keeps coming out of bed saying that she has to pee and because she is potty training, I can’t tell her no.

The last thing is the lack of sleep, for Kyah, me and the hubby. Kyah already wakes up a couple times a night, but now she is staying up for half an hour to two hours. The reason being, she wakes up if she has to use the potty, which is fine, actually it’s great. But then she’s awake and doesn’t want to go back to sleep. I’m hoping it’s just temporary and once she’s used to the new diaper-free situation, things will go back to normal.

Overall, this was definitely worth doing. It was hard and frustrating at times but patience, positivity and perseverance paid off. Now Kyah is proud to be a big girl!

How was your potty training experience? Do have any tips you can share with parents?