Mommy Guilt has been a part of my life in spades since Keyan was born. You name it, I’ve probably felt guilty about it:

– not spending enough time with him
– not teaching him enough songs, abc’s, numbers
– doing things for myself, away from him
– not cooking enough, or not cooking healthy enough
– wanting to take a break from the kids
– feeling bad for getting mad or yelling
– not reading to him enough

And the list can go on. I know that I’m being unreasonable to myself because I can’t be the perfect mom, only the best that I know how, yet, the Mommy Guilt is always there, lurking in the background, ready to pounce!

And then a whole new set of Mommy Guilt arrived after Kyah was born. Now I was comparing what I was doing for Kyah in comparison to what I had done for her big brother. All of a sudden, with two kids, there just wasn’t enough time or enough hands to do everything I wanted. Here’s where I experienced Second Child Guilt:

If I let myself, I guess I could probably drown in these feeling of Mommy Guilt, so lately I’ve been trying to put it into perspective because the guilt isn’t going to do anything but make everyone feel worse.

I look at my kids and realize, they seem to be pretty happy, healthy and well-adjusted kids, despite me feeling like I’m not doing enough.

As for my Second Child Mommy Guilt with Kyah, even though I wasn’t able to do all the same things with her as I did with Keyan, let’s get real, when there’s another kid around, there’s NO WAY that’s going to happen. Plus, she has an awesome big brother around her, someone she can play with and learn from everyday. Maybe that’s even better than being the first child and getting all the attention? 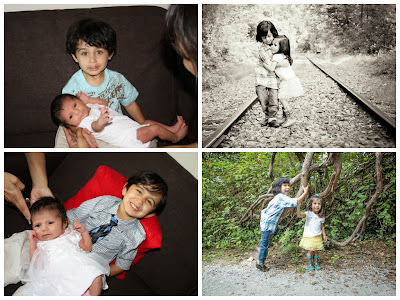 Either way, we as mother’s have to accept that we are doing the best we can and that our kids are happy. So let’s cut ourselves some slack and not let the Mommy Guilt take over!

When do you experience Mommy Guilt? And how do you deal with it?