We always make an effort to celebrate our wedding anniversary each year. After having children, it became a little harder, but it’s important to recognize the milestone in your marriage.

Often your relationship gets put on the back burner when family life gets busy.  Your wedding anniversary is a great excuse for a date night, some alone time with your significant other and a time to look back and remember why you fell in love. 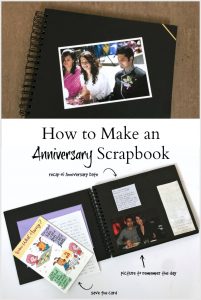 Every year on our  wedding anniversary, we have a special date, we watch a little bit of our wedding video and we update our Wedding Anniversary Scrapbook.

What is a wedding anniversary scrapbook you  might ask? It is a scrapbook where every year your record what you did on your anniversary. You can use a picture, a memento, words or a little bit of everything.

Here is how we made our Wedding Anniversary Scrapbook:

We used a blank scrap book to start. Then each year we added 1-3 pictures from our anniversary and added some description if needed. Sometimes we even saved cards and receipts (before kids, when we were keeners;) ) 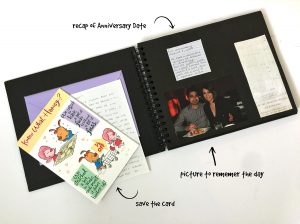 If you’re newly married, this is a great gift for your one-year anniversary because traditionally the gift is paper. We wrote each other a letter on our one year anniversary and then saved it and added it to the scrapbook.

If you’ve already been married for a while, this could be a great date night or anniversary project. Just find a scrapbook that you like, print out photos from your past anniversaries (Facebook is great at saving memories if you can’t find the pics,) grab a glue stick, some papers and markers and you’re good to go.

Think about what a fun night you’ll have putting this together while reliving all those wonderful memories. Then going forward, you can make sure to take a picture or save a memento each year to record what you did on your wedding anniversary.

(PS, there has been one (….ahem or two) years that I’ve forgotten to add to the scrapbook but I always catch up eventually.

It’ll be quite the Wedding Anniversary Scrapbook to look at on your 25th wedding anniversary and a wonderful memory and tradition to hand down to your children.

Do you have any Wedding Anniversary traditions?