Before I tell you What I Should NOT Have Said to My 6-Year Old, let me give you a little background leading up to what happened. 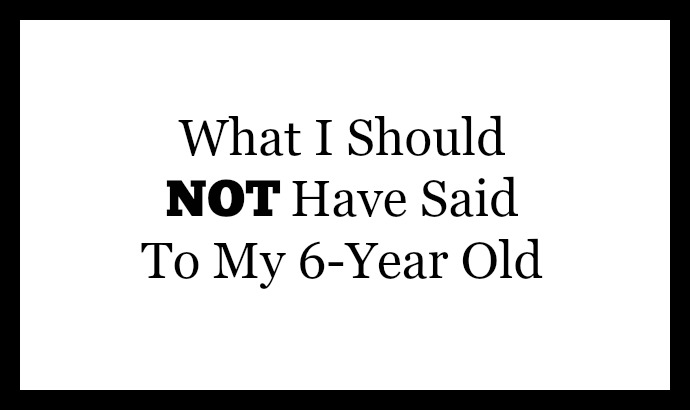 Keyan recently turned 6-years old. Leading up to his birthday, I noticed lots of changes, good changes. He was becoming more independent, decisive, adventurous, basically growing out of being a toddler and becoming a kid!

One change that I wasn’t too fond of was the shift from wanting mom for everything to wanting Dad. It was a hard one for me because from the beginning, it’s always been mom for everything, from tucking in at night, to the owies, for comfort, you mention it, mom was the first person to be asked.

All of a sudden, things were different. Now it was dad who was being called for everything and mom came in second. I’m not going to lie, I felt a little sad and I felt jealous. Yes, that’s right, I felt jealous that my son wanted his dad more than me. My husband and I talked about it and I know it’s normal for those changes to happen, but I couldn’t help how I was feeling.

So here comes the part of What I Should NOT Have Said To My 6-Year Old. One evening, the other week, the four of us were together for bedtime routine. I was reading books to the kids before it was time to sleep. Then my son said, “I want Daddy to put me to bed.”

It might not seem like a big deal, but for me it was. My husband and I each tuck one kid in and we alternate nights. But both kids always want me to put them to bed. And now it seemed like more often, Keyan wanted his dad, not me. So when he said that again, I felt a little twist in the gut and before I could stop myself, I said to Keyan, “Why don’t you just let your dad put you to bed every night?”

And it wasn’t in a happy way, it was in a slight undertone way. Who was I! How could I say that to my little guy who was just expressing what he was wanting?. He wasn’t trying to hurt anyone. Yet their I was, reacting like a jealous teenager.

It might have been a little bit better, if Keyan hadn’t noticed and it didn’t affect him. But that’s the worse part, it did! His face got sad, his voice got sad and he said, “But Mummy, I want you to put me to bed tomorrow.” My husband met my eyes and gave me a look. And I knew. I didn’t even need that look. I couldn’t believe what I had said and worse, that I had made my son feel bad for wanting his dad.

Not so great eh? And here I am, sharing it all with you. Why? Partly because I want to share the ups and downs of being a mom and show that no one is perfect. Partly because I’m hoping that I’m not alone when I reacted this way towards a 6-year old.

Have you ever had a situation where you’ve reacted in a bad way or said something you really regret to a child?