The Truth About Santa – November 2013

Christmas is in the air. We can see it and feel it everywhere. Decorations are up, Santa is at the mall, coffee shops are serving gingerbread and eggnog lattes and the gift shopping has started.

Even though I don’t celebrate Christmas in the traditional sense, being an Ismaili Muslim, I really do enjoy the season. People are happier, catchy carols are playing everywhere and there is a wonderful feeling all around.

The Truth About Santa

Growing up, my parents were always honest with me. They told me that  we don’t celebrate Christmas in our religion and that Santa wasn’t real. We had at special event that we celebrated on December 13 and my parents would give us each one present. I don’t ever remember believing in Santa and my husband’s family was the same way.

So I wasn’t really worried about how I would explain things when I had my own kids because it seemed so easy for me. Up until now, it’s been smooth sailing. The kids were so young so they didn’t really ask too many questions about about why we didn’t have a tree or give them lots of gifts or why Santa didn’t visit our house. And if they did ask, we just told them that Santa didn’t come to our house because we don’t celebrate Christmas.

The reason I never told them that Santa isn’t real is because I didn’t want them to accidentally tell another child and ruin Christmas for that child and have their parents get upset. But for the last little while, I’ve really been questioning if that’s the right decision. Is it right that I’m lying to my child to protect all the other children? Can I live with the fact that I’m telling untruths to my child who I promised never to lie to no matter what?

Now that Keyan is four and in pre-school, he is talking to me about Christmas more and more.

“Why doesn’t Santa come to our house?”

“We’re having a Christmas concert at school and Santa’s going to come and give me a present there.”

“Where does Santa go after he leaves the mall?”

“Can we go look out the window to see if he can see Santa flying home?”

“How does Santa go to all the kids’ houses in one day.”

My go-to answer of “we don’t celebrate Christmas” isn’t cutting it anymore. And I just can’t make myself tell him the stories about how the Santa at the mall is just a helper because the real Santa is so busy in the North Pole, or that Santa knows magic and can stop time. So what should I do?

At the start of the school year, when the topic of Santa came up with one of Keyan’s preschool teachers, she said it was so great that I did that because so many other parents wouldn’t and it ruins it for the majority of the kids who do celebrate.

So is that who I’m going to be? The mom who’s lying to her own child to keep so many other children happy? Or am I going to be the mom who tells her child the truth like she promised even though it may be at a cost?

It’s a really tough decision. Or is it?  Am I just making a big deal out of something that we will laugh about when the kids are older, just like every other child out there when they find out that Santa isn’t real?

The Truth About Santa Update – November 2017

After writing this post, I did decide to tell my kids the truth about Santa. Yes they were young at the time, 4 and 2 but for me, it didn’t feel right to lie to them so much. I always say to my kids, I will NEVER lie to you and so it just didn’t feel right for me.

We talked about it and they said they understood. Then next day when my 4-year old went back to preschool, he only whispered what he had learned to his teacher. Since then, unto present day, neither of them has breathed a word to any friends or kids they meet that they know, Santa isn’t real. Even when they have events where Santa is actually around, they still keep the secret! 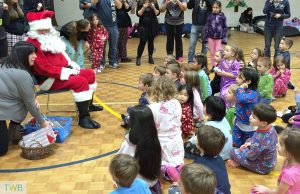 (Since Kyah was younger when I told them both, it took a little more work with talking to her about understanding the idea and not telling other kids. By the time she hit preschool the following year, she was all good.)

Once in a while I do give them a reminder and so far so good.

Now we all really enjoy the holiday season. In 2013, after telling them the truth about Santa, we decided to have a holiday tree each year. It’s so much fun putting it up and decorating it as a family and it is something they always look forward to. 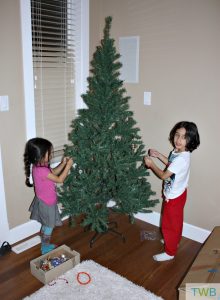 We also love doing holiday crafts and we always make a homemade ornament every year.

So in the end, the decision to tell the kids The Truth About Santa was the right one for me and my family. Of course every family and every child is different.

29 thoughts on “The Truth About Santa”